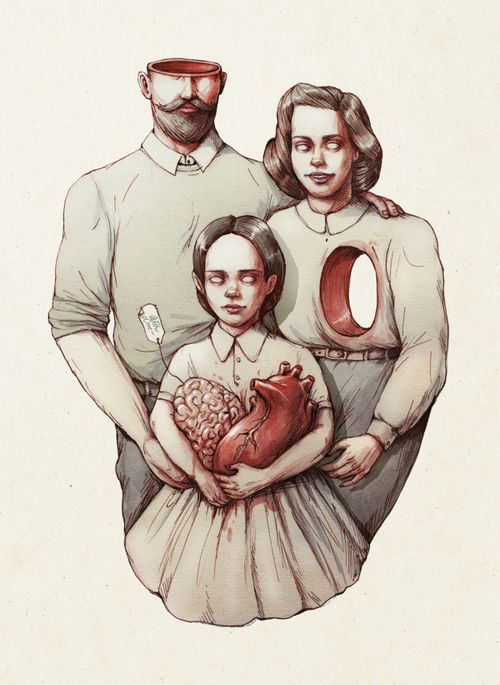 A large number of clients come to see me for anxiety, stress and depression, often believing there is something inherently wrong within them. We seem wired to think we are separate, perhaps because what links us is invisible to the naked eye. It’s difficult to see that our relational context contributes to our emotional state. It seems in fact that the ‘healthier’ our relationship network is, the healthier we are as individuals.

“Resiliency, our ability to cope with life’s ups and downs, is closely tied to the extent and quality of our support systems. We appear to be capable of coping with just about anything when we are connected to those whom we care and who care for us” L. Cozolino, 2006

The inverse is also true- when our family and social system is lacking in resourcefulness it can impact our functioning, especially during sensitive developmental stages- prenatally, in childhood and in adolescence. We can become symptomatic in response to a disturbance in an important relationship or in response to a relationship difficulty between people who are important to us.

The intimate relationships we have with our family members during our childhood and adolescent  development affect us in profound ways. The human family is an example of a principal environment which impacts our behaviour and experience not only in childhood but throughout the rest of our lives.

For a long time neuroscience has considered the brain and nervous system as separate entities. More recently, research has indicated that brains function in an interactive manner with other brains. In fact, neuroscience now recognises the considerable impact of social structures on the mechanisms of the brain and body of individuals through a continuous interplay of neural, neuroendocrine, metabolic and immune factors. Beyond food, water and oxygen the brain needs other people to function normally. Normal brain function depends on the social web around us. Our neurons require other people’s neurons to thrive and survive. A huge amount of brain circuitry has to do with other brains: brain networks that monitor other people, communicate with them, feel their pain, judge their intentions and read their emotions.

Human beings form systems beyond the individual, from dyads, to families, to friends, to co-workers, to societies. These family and social systems evolved hand in hand with neural and hormonal mechanisms. Social behaviours helped human beings survive, reproduce, and care for their offspring. We are starting to scientifically understand our interdependence with family members and social groups, the discovery of DNA for example has shed light on how human characteristics can be transmitted from one generation to the next. Discoveries in the field of epigenetics is now revealing how genes interact with the environment and vice-versa. Far from being the autonomous, individuals we thought we were, we are beginning to find evidence indicating that our behaviour is shaped by numerous interacting factors.

Brain growth and development are inextricably linked with conditions in utero, at birth and the first few years of life when we are dependent on our caretakers. Though we mostly view the relationship between mother and infant as the main factor for determining the outcome of child development, the mother-infant dyad depends on the larger family for care. While the embryo is dependent on the mother, it also triggers physiological processes which regulate the mother’s immune, endocrine, and other responses. Mother and embryo therefore are in reciprocity with one another. Moreover, the embryo does not only regulate the mother’s behaviour and physiology, but also the father’s.

“Males in a number of bi-parental mammals, specifically, several rodent and primate species, have been shown to undergo changing hormonal profiles during their mates’ pregnancy and lactational periods. These changes appear to mimic the hormonal fluctuations that are occurring in their mates. Importantly, many of the endocrine changes in mammalian fathers are modulated by paternal experience.” W. Saltzman & T. E. Ziegler

During the maturational process, the child moves toward greater autonomy, albeit relative to the relationship with the mother, father and extended family. The mother’s ability to support her child to become more independent while at the same time preserving a positive connection with him/her will depend on her own experience of being parented. The new generation is therefore influenced by the previous generation, making parenting a multigenerational phenomenon. The success of the emotional separation between mother and infant, evident in the infant’s ability to self-regulate and grow a functional self separately from his/her mother, depends on the maturity of the larger family.

“Knowledge developing in epigenetics is leading to a view in which development is seen as an ongoing and mutually influential interactive process between genome and environment” (Noone, 2015).

In differentiated family systems individual members put their energy toward their own life goals whilst at the same time maintaining connection to other family members. In less differentiated family systems on the other hand, family members expend energy in reaction to one another, ultimately detracting from their own ability to function optimally. These individuals will struggle to adapt to stressors as their energy is taken up less in regulating themselves and more in reaction to others. It is more likely therefore that symptoms such as depression and anxiety will develop in individuals embedded in less differentiated families.

How those symptoms will be responded to- weather the anxious person will manage their own anxiety or another family member will function for them instead, will determine the intensity and duration of the symptom. If, for example, a husband becomes depressed after the loss of a job and his wife looks after him by letting him drop his functioning: makes his doctor’s appointments for him, encourages him to see a counsellor, finds the counsellor, makes the counsellor’s appointment for him, cooks for him, takes up his chores, he will probably initially feel relieved and supported, but if this continues he will start to feel less capable and his depression will probably increase. This pattern is called ‘over and under functioning reciprocity’ and it is common in families where a symptom in a family member lasts longer than the appropriate time. If on the other hand, the wife had supported the husband for a little while and then when appropriate had stopped, keeping the focus on herself in order to manage her own discomfort in response to her husband’s depression, the husband would have had the opportunity to manage his own depression. Of course the husband could find someone else to function for him, such as his son or his mother. Either way, functioning for oneself and continuing to look after one’s own responsibilities in life is one way to decrease a symptom such as depression in both oneself and a family member.

Decreasing a family member’s symptoms of depression and anxiety therefore is something all family members contribute to, especially those closest to us. Much like the social brain therefore, the symptom belongs to the family, not the individual.